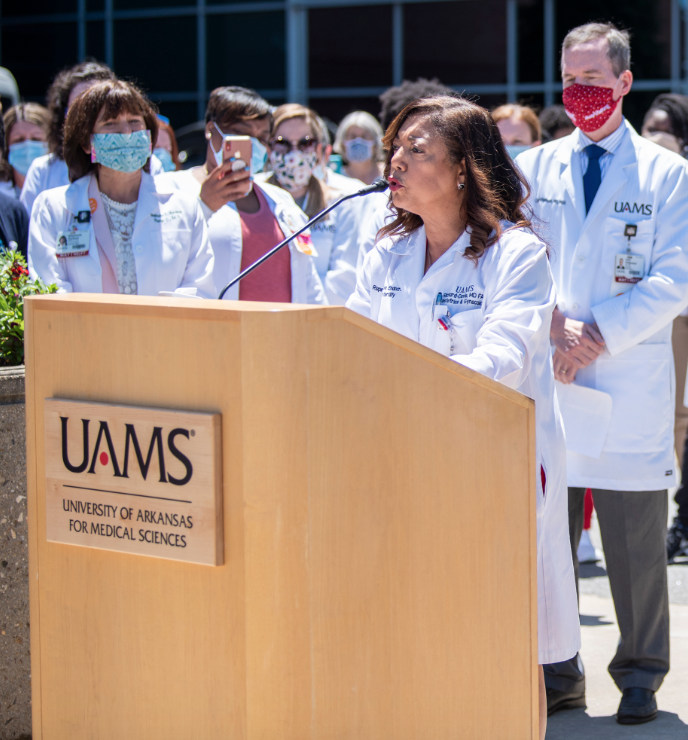 Dr. Richard-Davis is a native of south Louisiana, born in Opelousas and grew up in Baton Rouge. She is Executive Director for UAMS Division of Diversity, Equity and Inclusion. She is also a tenured Professor in Obstetrics and Gynecology and, Division Director for Reproductive Endocrinology and Infertility as well as Medical Director for the Physician Assistants program. She joined the UAMS faculty in January 2013. She is board certified in Reproductive Endocrinology and Infertility and Obstetrics and Gynecology. She previously served as Professor and Chair of the Obstetrics and Gynecology Department at Meharry Medical College and Executive Director for Center for Women Health Research (CWHR) from January 2007 – 2012. The CWHR was and remains the only center fully focused on conditions affecting women of color. Prior to her appointment, Dr. Richard-Davis served as the Section Head of Reproductive Health Services for Ochsner Clinic Foundation and the Medical Director of the Fertility Center at Ochsner from 2000-2007 in New Orleans. She was Assistant Dean in Student Affairs and Assistant Professor in the Department of Obstetrics and Gynecology at Tulane University School of Medicine from 1994 – 1998.

Dr. Richard-Davis has more than 30 years of experience in women’s health and reproductive endocrinology and in general obstetrics and gynecology. She has served in leadership positions in medical professional societies, including the American Society of Reproductive Medicine (ASRM), the North American Menopause Society (NAMS), and the American College of Obstetrics and Gynecology (ACOG). She is an oral board examiner for ABOG. . She is recognized nationally and internationally as a leader in women’s health serving as a consultant and advisor to many professional organizations and corporations. She is also the recipient of many awards and grants for her research and scholarly activities presented at many national and international meetings.

She recently joined the Center for Diversity, Equity and Inclusion at UAMS as executive director. Throughout her career she has been a fierce supporter and advocate for diversity, equity and inclusion. Much of her work in research has been focused on conditions that disproportionately affects women of color, such as fibroid. She wrote an early publication highlighting the cultural differences in how women experience menopause and disparities in fertility treatment outcomes, racial physiological differences in uterine fibroids and breast density as a risk factor for breast cancer. She found through ASRM a special interest group on health disparities to highlight those differences and served as Chair the first 4 years. While serving on UAMS medical school admission committee she was keenly aware of the pipeline leaks that occurs with underrepresented minority students at multiple points in the education process. She has been a mentor and advisor to many medical students, residents, health profession and college students.

As a member and officer in the Little Rock Chapter of Links, Inc she serves our underserved communities, specifically communities of color focused on supporting women and children. She has served on many boards focused on disparities, such as March of Dimes, Nashville CARES (HIV non-profit) and National Medical Association ob gyn executive committee. She and her husband, Dr. Rodney Davis, have done multiple medical mission trips to eastern and western Africa. They hope to continue this work in retirement.

Quotes and words that guides my life and moral compass

“Life’s Most persistant and urgent question is, what are you foing for others?”

“Of all the forms of inequality, injustice in health is the most shocking and inhuman.” Dr. Martin Luther King